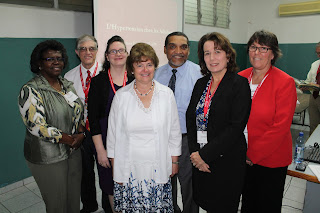 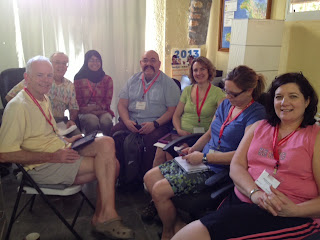 The Patient Care team spent their time in Haiti treating more than 600 patients from two weeks to 92 years of age. They worked at five different clinics and an orphanage throughout the region and saw a number of conditions. They were able to see over 100 children one of the days for well-child exams. This is not something that normally happens in Haiti and was considered very rewarding for all involved. The physicians were able to treat a number of patients that had been seen previously at the clinics and were impressed by the continuity of care that they were able to achieve in such remote locations. The Patient Care team consisted of the following family physicians and AAFP members: 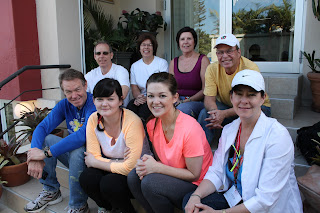 The Service Team spent their time in Haiti giving back to its smallest voices at the Rose Mina Orphanage and the Fondwa Orphange and School. While they were working at Rose Mina they were able to paint the facility a cheerful yellow, inspect the recently completed dining room and renovated bathrooms funded by the AAFP Foundation, provide food, vitamins and other basic necessities to the children. The entire Delegation hosted a lunch and party for the children with treat bags, balloons, soccer balls, and fun all around!

The Service Team also drove to Fondwa Orphanage and School to visit the children, deliver clothing and soccer balls, and see the kitchen renovation project which was funded by the AAFP Staff.
This group also helped out at the Bel Air Clinic by completing improvements to the clinic facilities such as painting and staining the remodeled triage area, the new enclosed pharmacy area, and improved bathroom facilities. All projects were funded by the AAFP Foundation. The Service Team consisted of the following individuals:
Lori Foley of the AAFP Foundation served as Staff Lead for the Team.

If you would like to be part of this rewarding work in Haiti, please consider making a donation. Through your donation to Family Medicine Cares International, you are making a difference in helping those in need, at home and around the world.

Posted by AAFP Foundation at 8:45 AM No comments:

Just the Beginning in Haiti

One of those locations was in the historic city of Cap Haitien, on the country’s north coast. The symposium in Cap Haitien was documented by a journalist from the French-language Le Nouvelliste, Haiti’s oldest and largest daily newspaper.

Click the screengrab to the left to see the original article and to read it in French.
Or look below to read the article translated directly into English.

FOR A SURVEY OF THE LEVEL OF HEALTH IN HAITI
Le Nouvelliste | Publié le : 2013-02-06
by: Daphney Valsaint Malandre

Cap Haitien, Haiti — While the final preparations for organizing the carnival takes place in a city of Cap-Haïtien boosted, a group of Haitian and foreign doctors met at the training center of the Justinian Hospital for a symposium Monday, February 4, 2013 .

This activity falls within the framework of a project resulting from the agreement between Dr. Andre Vulcain, the “Project Haiti”, the American Academy of Family Physicians and Heart to Heart International. This project aims primarily to raise the level of health in Haiti while focusing on family medicine. Dr. Andre Vulcain, Haitian doctor, trained in Haiti but who have a specialization in family medicine at the University of Miami, working for the “Haiti Project”, a project of the School of Medicine of the University of Miami that supports Justinian Hospital for nearly 12 years.

Dr. Vulcan returns to Cap-Haitien regularly to provide support for training family physicians can take care of most health problems that may be present in a population. The “Haiti Project” has also helped the hospital develop a service family physicians and to develop a program of support for PV / HIV and a physical rehabilitation program. Their main goal is to assist existing entities and help them to build their capacity. To do this, they are backed by the American Academy of Family Physicians and the NGO Heart to Heart International.

The mission of the American Academy of Family Physicians in Haiti spans three phases. The organization of the Cap-Haitien symposium on cardiovascular disease in partnership with Dr Vulcan is the first. A second symposium will be held in Port-au-Prince Thursday, February 7. Meanwhile, a part of the team providing care to the needy in the area of Leogane while another is actively working in clinics and orphanages in neighborhoods like Bel Air.

Haiti has not been the first country to benefit from the assistance of these practitioners from the United States. These have indeed worked in many other underdeveloped countries. Heart to Heart International, a nongovernmental organization based in the United States, meanwhile, already working in Haiti for five years. The organization has shown, among others, has enough on Haitian soil immediately after the earthquake of 12 January 2010. At that time, there was talk of bringing first aid and provide necessary equipment. This time around, she wants to launch a new program that has already been proven in several Soviet countries for twenty years.

Heart to Heart International has already set up a permanent office in Haiti and several clinics in areas such as Leogane, Bel-Air and the south-east. A staff of about forty Haitians supported by foreign doctors ensure the proper functioning of these clinics. The organization is not only combined with other entities such as the American Academy of Family Physicians, but also with the Ministry of Public Health and Population (MSPP) to help Haitian doctors to become specialists in family medicine and increase the level of education of nurses.

These symposia which is attended by representatives of the American Academy of Family Physicians and Heart to Heart International and Dr. Andre Vulcain are in fact the beginnings of a project should extend the long term.
Posted by AAFP Foundation at 1:40 PM No comments:

AAFP Foundation
The American Academy of Family Physicians Foundation advances the values of Family Medicine by promoting humanitarian, educational and scientific initiatives that improve the health of all people.